West Hallam Parish Council provides your local services. We strive to make West Hallam a better place to live, work and play. Our website includes a wealth of information about how we conduct business and what we do. Use the search or browse the site to find whatever you are looking for. If you can't find the information you require then please contact us.

Although it is not know exactly when the first settlement appeared, West Hallam is mentioned in the Domesday Book as having belonged to a man called Dunstan before the Norman conquest.

By 1199 the Lords of the Manor were the de Cromwells, who probably built the Church in about 1275, together with their moated Manor House, the site of which is near to Pinnacle Storage and which is a Historic Monument (no public access).

The de Cromwells often feuded with Simon de Aderne, Lord of Mapperley whose own Hall was on Park Hall Lane (known as 'Simon Lane' to locals). West Hallam's gallows were at West Hallam Crossroads, with the graveyard opposite.

Ralph de Cromwell, Lord of West Hallam was Lord Treasurer of England for Henry VI and was killed in the first Battle of St Albans in 1455. He died without issue and West Hallam was purchased by the Powtrell family in 1467.

The Powtrells kept their catholic faith after the reformation, leading to persecution. West Hallam Hall became a refuge for priests, and there were rumours that a tunnel led from there to Dale Abbey.

In 1662 the Rector, Rev. John Scargill died aged 74. In his will he left a bequest which formed both the Scargill School and the Scargill Trust, and he is buried in the chancel of St Wilfrid's Church.

The last male Powtrell died in 1687 and West Hallam passed to a distant relative, Sir Henry Hunloke. The Hunlokes too were catholics, and Sir Henry (1654-1715) became Chairman of the JPs bench in 1687 under the catholic James II. However when the King was deposed the next year Sir Henry was imprisoned and lived the rest of his life under restriction.

Another Sir Henry Hunloke (1724-1804) was a sponsor of the Nutbrook Canal scheme in the 1790's, but financial ressures led to the family selling its interest in the company and the eventual sale of West Hallam to Francis Newdigate (1774-1862) in 1821.

In 1878 the Great Northern Railway opened its Staffordshire extension throughWest Hallam, with a station ("West Hallam for Dale Abbey") at what is now Station House at the Stanley end of Station Road. The line linked the old Nottingham Victoria and Derby Friar Gate stations.

The Newdigates filled the role of Victorian Lords of the Manor well, and there were three in all. The last Squire Newdigate was Sir Francis Alexander (1862-1936) who was an MP and whose first wife was the Hon. Elizabeth Bagot (hence 'Bagot Street'). The family started to sell off land in the 1890's and although the last West Hallam Hall was built in 1876 it was only occupied by them for a short time before being let out. The last part of their West Hallam estate was sold in 1914 through Albert Ball, a local land agent and the father of the WW1 fighter ace Albert Ball VC.

Squire Newdigate went on to be Governor of Tasmania (1917-20) and of Western Australia (1920-24). West Hallam Hall was demolished after the second world war and for many years the site was vacant until Hall Court was built in 1963.

In 1940 West Hallam Dispersal Depot was built by the military off Cat and Fiddle Lane, to relieve pressure on their Chilwell depot. It eventually comprised 112 Romney sheds with nearly a million square feet of storage space and closed in 1959. The site re-opened in the 1960's as Midland Storage, later operated by TDG Pinnacle, and now (2019) by XPO Logistics.

West Hallam had traditionally been a rural community which relied on farming and allied trades for its employment, but from the 19th to the late 20th century also had its fair share of coal mining. Most of the land between West Hallam Village and Ilkeston together with much of what is now the Hallam Way estate was opencast mined in the middle of the 20th century. There were several deep seam mines also, and an ironworks on the Nutbrook Canal towards Mapperley from about 1850. The last working pit was Stanley Colliery, by the side of the railway station and which closed in 1961. Some of the buildings still survive, now used for industry. In the closing years of the century, most of the eyesores and spoil tips were removed, returning the environment to something like what it had been.

The Newdigates had run a brickyard near Mapperley Crossroads, using local clay from a pit in what is now Kiln Close.

In the 1920's West Hallam Pottery made decorative earthenware and examples can still be found locally. For many years the pottery site was abandoned and slowly deteriorated until it was bought in the 1980's by Mr Charles Stone and family and developed as the much admired Bottle Kiln buttery, craft and art gallery, saving the remaining (listed) kiln for posterity in a sympathetic environment, as well as attracting people from much further afield into West Hallam.

The 1960's to 1990's saw a great deal of new housing built in West Hallam together with a new shopping development on the site of White House Farm in the village. The fields between The Village and High Lane West were gradually filled in, although some of the old field boundaries are mirrored by the new road layout.

West Hallam's population increased dramatically, the influx of new residents adding to the village's diversity and opening another chapter in its history.

Thanks go to Grant Shaw for providing the original text for the above.

Grant Shaw was a Parish Councillor for eight years and was the Council's youngest ever Chairman in 1989-90. 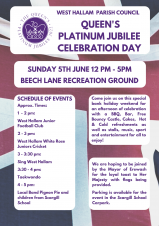 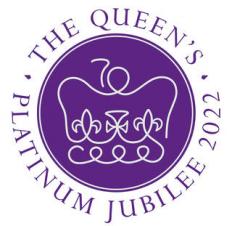 The Platinum Jubilee is due to be celebrated over a special
extended Bank Holiday commencing on Thursday, 2nd
June with the lighting of beacons across the country.
The Parish Council feel that this is an event that could
really bring the community together and it has been
decided to hold a Celebration Day on Sunday, 5th June,
12 noon until 5 pm at Beech Lane Recreation Ground.
There will be a barbecue, a bar, cakes/tea/coffee/soft
drinks, ice-cream and lots of entertainment, music, our
local choir, a dance troupe, scouts, guides and brownies
showcasing their skills, demonstration by Taekwondo,
inter club junior football match, inter club Junior cricket
club, school children from Scargill School entertaining us,
children's entertainment, bouncy castle and hopefully a
visit from the Mayor & Mayoress of Erewash to propose a
loyal toast to Her Majesty. If all goes to plan the afternoon
will end with a brass band and some flag waving. It should
be a fantastic afternoon and a chance for the community
to get together, make a note in your diary, Sunday, 5th June. More »

Platinum Jubilee Memento for School Children
On this special occasion, a once in a lifetime event, the
Parish Council have ordered some Jubilee coins for the
schoolchildren at Scargill School and any West Hallam
schoolchildren who attend Mapperley School. We also
realise that some parents would perhaps like to have one of
the coins for siblings, so we have ordered extra which will be
available to purchase at cost price. More information on this
in the next month or so, but we feel it is only right that our
schoolchildren should have a keepsake of this magnificent
event. » Less 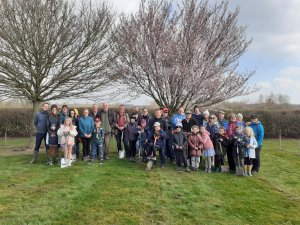 Around 40 people (with particular thanks to the 10th Ilkeston Scout Group) turned up to help the parish council plant more than 100 saplings on a bright Sunday morning in March. More »

Most of the trees have been planted at the bottom of the High Lane East recreation ground, with a few more at the park on High Lane Central. As well as the parish council doing its bit to help the environment and fight climate change, we were also taking part in the Queen's Green Canopy campaign which aims to plant millions of trees around the country to celebrate Her Majesty's 70 years' reign. The position of the new trees has been planned to ensure that there is no reduction in playing area at either park.