The West Hallam War Memorial stands outside St Wilfrid's Church near the centre of the village. It comprises a sculpture of two soldiers with a Vickers Machine Gun in Italian marble, standing on a Derbyshire Gritstone plinth upon which are panels with names and inscriptions. The whole structure is on a three stepped base with a laurel wreath and two additional plaques placed upon the steps. The memorial is Grade II listed.

First dedicated in 1921 the Memorial originally recorded the names of the nine parishioners who lost their lives in the service of the country in the 1914-18 war and a further sixty-three that served, but subsequently was extended to include the names of those who died in the 1939-45 war.

You can read more about the memorial on the Mapperley History website at www.mapperleyhistory.com/WW1-2/WW1-RW-2.html

Research notes and other material relating to the extension of the Memorial (which was re-dedicated in September 1949) have kindly been made available by local historian Mr Roger Wood and may be viewed from this link (opens in a new window). 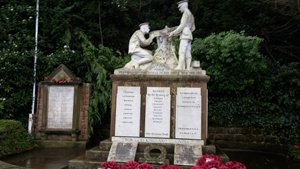